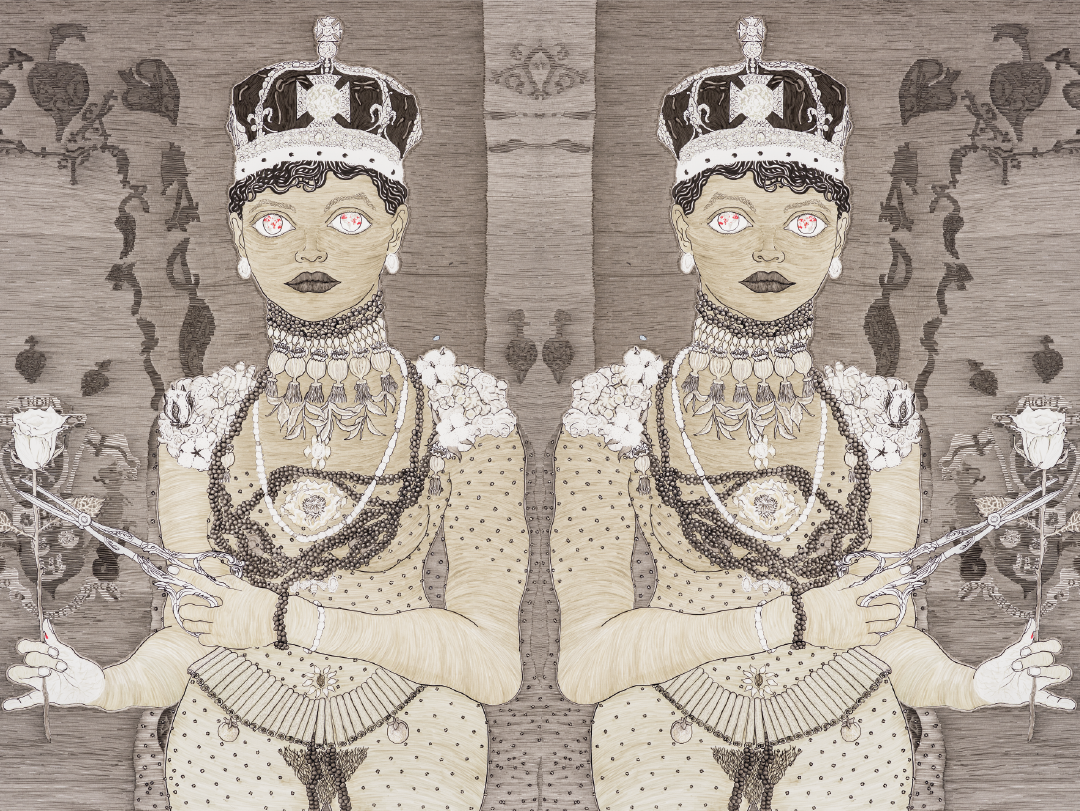 198 Contemporary Arts and Learning is happy to present the first UK solo exhibition of decolonial artist TextaQueen. TextaQueen is an artist of Goan Indian heritage, working and living on unceded Wurundjeri land in so-called Australia. On view from April 5-26, 2019, The Empire’s New Clothes brings to surface complex and interwoven issues of race, gender, and sexuality through allegorical visual language that melds erotic imagery and ethno-cultural iconography of India. The artist firmly positions themselves within art history’s tradition of nude self-portraiture, descending from Frida Kahlo, Laura Aguilar, Mickalene Thomas, amongst others who combine their empowered vulnerability, a heady desire to survive and thrive, and the ritualising of new life in art.

The Empire’s New Clothes processes the narratives of neocolonialism, exoticism, expectations of cultural authenticity, of disconnection and connection, experienced by the artist during their ‘return to Mother India’ as a second-generation emigrant. Picturing themselves in fluid embrace with animals associated with India – a Rhesus monkey, a Rampur hound, a white peacock and the sacred cow – TextaQueen is both divine being and cosmos, reuniting diasporic legacies with unabashed spirituality, sensuality, and tenderness. This is in spite of, and to spite, the violent and ongoing impact of British colonialism and Catholicism which situates people of colour within a painful history of legitimation through art and ethnography. Here, the brown femme body is allowed to exist in a transformative and prismatic world where, to paraphrase Stuart Hall, one not only returns to their roots but also comes to terms with their routes.

This exhibition curated by Mattie Loyce presents a selection of works from TextaQueens’ Gods Save the Queen series which was made possible via institutional support from Kriti Gallery in Varanasi, India via Asialink Arts, Australia and additional new works created during TextaQueen’s current artist residency at ACME Studios, London via Australia Council for the Arts. Site specific shrine installations created by Raju Rage and Daniella Valz Gen.

TextaQueen is known for using the humble felt-tip marker to draw out complex politics of gender, race, sexuality and identity. Their portraiture unweaves impacts of cultural and colonial legacies, and the influence of visual and popular culture on personal identity. In collaborative processes with other ‘othered’ and displaced people and by examining their own existence as a person of Indian origin living on others’ stolen ancestral lands, they create portraits of people not often represented in states of empowerment.

Showing wildly and widely, from bedroom shrines to acronymed white walls, their work has appeared at Gallery of Modern Art, Brisbane; Museum of Contemporary Art, Sydney; de Young Museum, San Francisco; Western Exhibitions, Chicago; and Kunsthalle Darmstadt, Germany, and a mid-career survey show toured nationally in Australia via Mornington Peninsular Regional Gallery in 2017.  Their work is held in collections such as National Gallery of Victoria, Cruthers Collection of Women’s Art and the National Portrait Gallery of Australia.